Making music is Val Blaha’s destiny. She started singing before she could talk, and by age 12 she was a highly accomplished classical pianist, earning recognition from various regional and national organizations. In college she studied piano accompaniment for 3 years before changing course to focus on anthropology, but she soon veered back in a musical direction, learning rhythm guitar, and was greatly inspired by the music of Emmylou Harris and Nanci Griffith.

Val’s musical tastes lean toward strong melodies and compelling story-telling. She’s most at home playing folk and country music, but enjoys listening to a wide variety of genres. She matches her lilting alto voice with her steady rhythm and finger-picking guitar work, and the combination yields a musical experience that brings her fans back time after time to listen and enjoy. 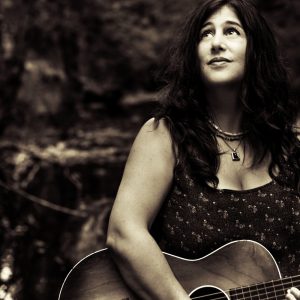 Fast forward 3 years (after the birth of her son). Val formed Top Hands, a country/classic rock cover band with good friends Mike Aplin and Bruce Braukman. The trio (Val’s main role was singing and playing mandolin) performed at farmers’ markets, restaurants, and parties in Oregon, and her experience with the band gave her the confidence needed to branch out and start writing and performing her own music.

2016 was a busy year for Val. She performed at least 40 shows, including solo performances, and with her band Val’s All Purpose Shine (with Joe Aloia, Theresa Riccardi and Jamie Corff). In May she recorded four original songs with producer Rob Stroup (The Baseboard Heaters, Moody Little Sister) at 8 Ball Studio in Portland, OR.  The new EP Fact or Fiction includes “Gaslight” and “Ghost Town”, and was released on 9/1/16.

That summer of 2016 Val went back into the studio with her folk-pop duo Luminous Heart. Luminous Heart (Val with guitarist/singer/songwriter Jamie Corff) recorded their first album, a six song EP, at Pyrate Llama Studio, and the EP Possibility was released October 2016.

During 2017, Val performed over 25 shows, both solo and with Luminous Heart. In 2018, Val continued to write and perform, and also completed a successful a run as Bitsy Mae Harling in Gallery Theater’s performance of Sordid Lives in McMinnville, Oregon.

Val headed back into the studio in May 2019 to work with producer Jamie Hill. World on Fire was released in August of that year, and includes performances from several stellar Puget Sound musicians including Dan Tyack (pedal steel, resonator), Jesse Turcotte (bass), and Dave Hannon (guitars). Head over to Val’s store or find the album wherever you buy or stream music online!

Like most musicians, Val pulled back from performing starting in March of 2020. She spent the year focused on teaching her students remotely, and also set up a home recording studio and learned the fundamentals of music production. She finished producing and recording a song for an upcoming short film, and also has been writing music for a new project with Luminous Heart.